A Diver and His Helmet: A Happy Reunion

It was a routine business call that brought Jon Hazelbaker to Upstate New York last week, but the series of events that took place were anything but ordinary.

In 1986, commercial diver Jon Hazelbaker was working on a big diving project in Corinth, New York for the International Paper Company. After about three months, the job was almost complete. However, he was called back for a few more days to work on another part of the power plant. After packing up his gear - helmet and everything - Hazelbaker headed back into Albany and checked in to a hotel around 1 o'clock in the morning. The next day started early around 6am. and as he was checking out of the hotel, he discovered that his truck had been broken into. His helmet was gone.

This discovery was completely disheartening, not only because of its obvious monetary value, but because Hazelbaker had accumulated literally thousands of hours working time in it; it was a helmet that he had used and lovingly abused for 16 years. 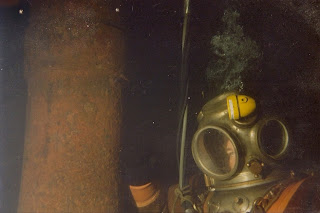 Devastated, he took out ads in local newspapers and trade magazine with a photo of the helmet (pictured above) and offering a reward for its return. He even sent out letters and photos to local dive shops and other commercial dive firm competitors.

Flash forward 25 years to 2011 when Hazelbaker was assigned by ADCI to perform a safety audit for commercial diving firm Seaway Diving & Salvage - a routine practice in the industry. While scheduling his visit to Waterford, New York, Hazelbaker recited the story of his stolen helmet to the owner of Seaway, Tim Joslyn. After a few minutes, Joslyn said, "I think we have that picture still here." He quickly located the original photo from 1986 in a file and told Hazelbaker that he knew where that helmet was. The previous owner, Kevin Lengyel, had kept the photo around all those years. Overwhelmed with joy, he exclaimed over the phone, "Tim, that is my hat!"

After taking care of business at Seaway, Hazelbaker took Joslyn's advice and soon found himself en route to a dive shop in Clifton Park, New York - ready to get his hat back. Upon arrival, Hazelbaker was asked to identify the helmet in detail, and of course he was able to recall each and every fitting and dent in the helmet, many unique to this particular hat. After a little while, he was finally reunited with his old helmet, almost 25 years to the day when it was stolen. 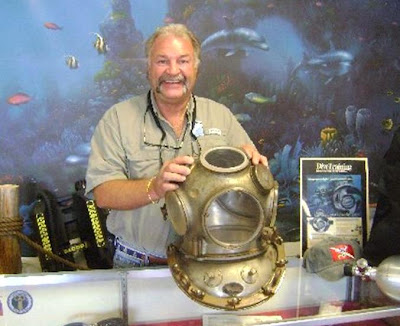 Hazelbaker gives credit to the owners of Seaway for this happy reunion; to Kevin, who kept the picture around so long, and to Tim who is responsible for putting all the pieces together.

If you have any happy stories like this one, we would love to hear about them!
-Erin
Manager of Collections and Administration
Capt. Jon Hazelbaker is a commercial diving consultant and Board Member at the History of Diving Museum.
Posted by Erin at 10:28 AM