The World-Wide Impact of the South Florida Divinhood 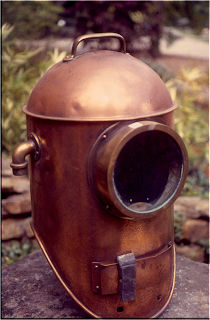 Florida Keys historians have emphasized treasure salvage, but overlooked that this started with an invention called the South Florida Divinhood. Biologists alike have forgotten that modern marine biology orginated with the same apparatus, and at the same time, diving historians have overlooked that the same Divinhood started recreational sports diving right here in the Florida Keys. Likewise, each of these developments had an international impact, and in each, the Divinhood served a key role as the catalyst. Here we will explore these interesting adventures and the impact of the South Florida Divinhood.

An exaggeratedly optimistic view describes one of the newest cities in the United States, Miami, Florida: "There is nothing finer in the world, than Miami with an up-to-date, go ahead class of people." It was a great place to live and make money, and if you couldn't succeed in M 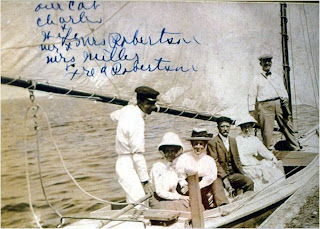 iami, you would be a failure anywhere. Here was the best jail, an ice cream factory, free mail delivery, electricity, a telephone system, and four newspapers. Henry Flagler had built a complete infrastructure with all the modern conveniences to make Miami a tropical paradise and playground, prompting development, enterprise, and opportunities.
It was in this vibrant "can-do" environment that 37 year-old William F. Miller arrived from Evanston, Illinois in 1902. He quickly and eagerly participated in the new and ample opportunities. Miller is shown here standing by the mast of his sail boat with his wife Carrie closest.
William Miller invested in many businesses, but as fate would have it, he met the captain and craftsman William S.

Dunn. By 1913, Miller and Dunn partnered in hardware, plumbing, and tinning businesses in the center of town on Avenue D. Where Miller was an excellent business man, Dunn was on the opposite end of the spectrum and could build just about anything with his hands. Dunn made a number of useful inventions for the surrounding South Florida waters as he had the tools and materials necessary from his hardware and tinning stores.
The Divinhood
To quote a common cliche, "Necessity is the mother of invention!" The craftsman Wi 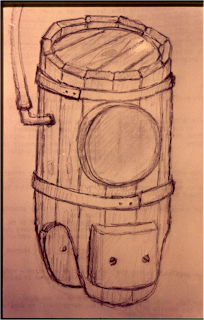 lliam Dunn found a growing need for a diving apparatus to recover items that had fallen into the Miami waterways. What he built was a simple diving helmet from a cylindrically shaped wooden nail barrel. 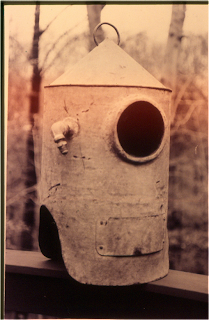 The final product was an open-bottom helmet called the Divinhood. It was a copper design that was light, simple, very practical, and easy to use. The patent would show a single viewing port, a handle on top to easily lift it over the dive 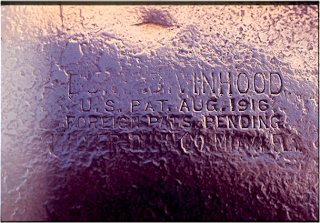 r's head, and an ordinary garden hose fitting that provided air to the diver. Imprinted on the helmet was the trademark "Dunn Divinhood." The secret to its success and popularity was that it was so well adaptable it was perfect for diving in the warm, shallow waters of Miami and the Florida Keys.
Miller and Dunn 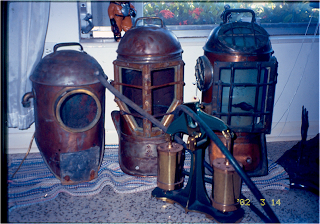 began commercially manufacturing the Divinhood and advertised its application for a wide range of uses. Actually, a series of three Divinhood styles were developed: the Style 1 in 1916, the Style 2 in 1926, and the Style 3 in 1937. Alongside the helmet, Miller and Dunn developed compact double cylinder pumps in three improving designs for each successive Divinhood Style.
The World-Wide Impact

Some of the most common questions people ask are: "What were the helmets used for? Why make diving helmets? And, who needs them and for what?" The open-bottom helmet was so functional, it became a key technology in starting many fields related to diving. Accordingly each helmet style is credited with sparking a groundbreaking achieve 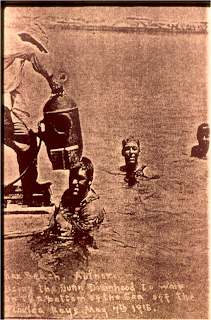 The Style 2 is credited with starting modern 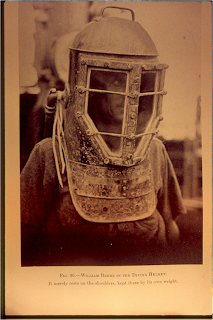 marine biology. The first scientist to discover the great potential of the simple Divinhood for underwater study and exploration was Dr. William Beebe. At the time, Dr. Beebe was the Director of Tropical Research at the New York Zoological Society. In 1926, during his cruise on his ship called the Arcturus, Beebe for 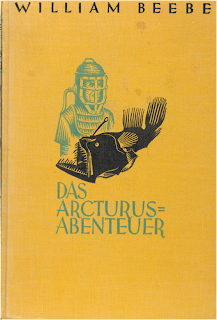 tuitously acquired the newly procured Divinhood and packed it in its compact crate amongst the cargo. His first dive was more than just an eye-opener for him. It exposed him to the unknown wonders of marine life and an easy way for sub-surface study. Upon entering the water, he instantly became converted from ornithology to marine biology. After he introduced the Divinhood Style 2 for 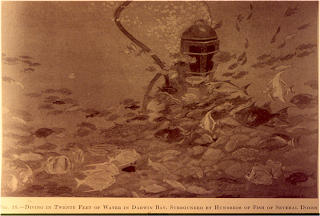 underwater study and photography, many other biologists followed his lead. The Style 2 was also widely used for motion pictures, initially by Beebe, and later by Hans Hass and R W Miner.
Lastly, the Style 3 was 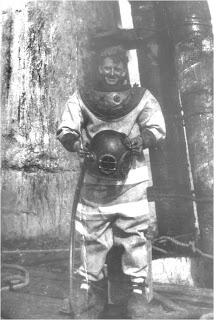 becoming more common-place for those seeking access to the underwater environment, but the most interesting and picturesque character to use it was Art McKee, today a Florida Keys legend. A native of New Jersey, McKee was trained as a diver in heavy closed helmet gear. As the war approached, he took a job laying the pipeline under the Keys' bridges for the Aqueduct Authority and for the Navy. Art then discovered the Divinhood Style 3 and adopted it as his favorite 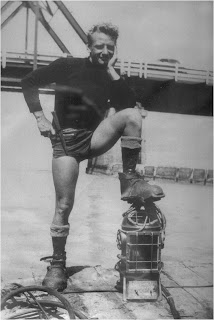 helmet. Shedding the warm, heavy gear associated with full diving-dress, Art began a long attachment to his open-bottom Divinhood. He preferred it even when early SCUBA became available and was used by all his diving companions and associates (note Art in the picture on the left using the Divinhood while the others use modern diving apparatuses). Art Mc 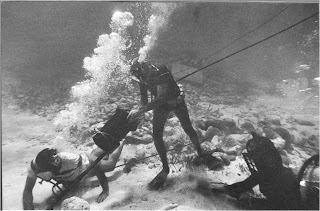 Kee used the helmet preferentially for pipe-laying, treasure salvage, and to initiate sports diving for tourists in the Florida Keys before SCUBA in 1948. Of the many applications of the Divinhood, McKee initiated modern salvage diving using the Divinhood Style 3 and became known as the Father of Treasure Salvage and also "Silver Bar McKee."
Homemade and Commercial Imitations 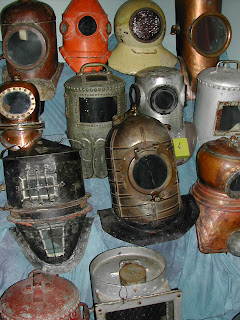 The Miller-Dunn helmets were so functional they became widely imitated and replicated by others for their simplicity and usefulness. Craftsmen in their garages started using household items to build their very own version of the Divinhood. What they produced were many oddly shaped helmets with no two alike; however, they all shared one common feature: the open-bottom concept.

Maybe the most famous customized helmet was designed for marine biologist, underwa 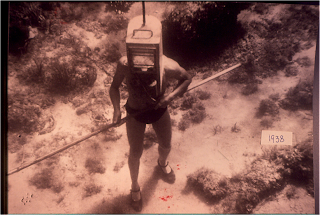 ter educator and photographer, Hans Hass. Distance and brewing pre-war tensions encouraged him to have a helmet made in Vienna by a tinsmith with the concept of the Divinhood in mind. Like Beebe, with this helmet he could now walk leisurely around the seabed and explore the reef. 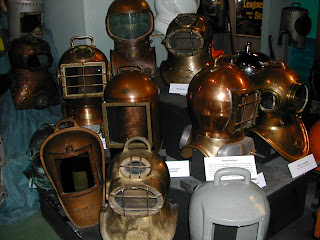 Realizing there was a demand for open-bottom helmets, many commercial manufacturers mimicked the concept. Companies that at one time exclusively built the helmets for the full diving dress were now producing open-bottom helmets that were as functionally sound as the Divinhoods. For instance, the Hammond Company also of Miami, Florida built quite possibly the best open-bottom helmet design. The Divinhood required four weights to overcome the force produced by the contained air. The Hammond helmet, on the other hand, was constructed of heavy brass and was absent of any additional weights. It was also very large with a huge viewing port. It was an absolutely fantastic design.
Today, the open-bottom concept the Miller-Dunn Company 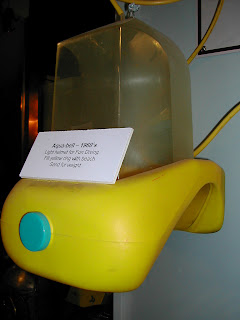 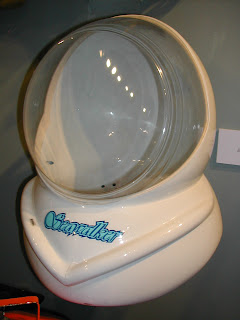 larized is still existence today. The modern SeaWalker invented for resort diving is still used in parts of Japan for the same desired simplicity as the early Divinhood. The helmet fits comfortably over the shoulders, and one can walk the ocean floor. The yellow AquaBell was also a popular recreational diving unit through the 1960's. It was mainly used by beach combers that would bring the plastic helmet along on their trip, fill the yellow ring with sand, and use the specially designed pump to supply air to the bell.
The Significant Impact that is the Miller-Dunn Divinhood

Although the Divinhood is now considered an obsolete technology with the advent of replacements such as SCUBA, fiber-glass helmets for commercial diving and submarines, their technological significance to the history of science and technology serves as an important learning tool. At the History of Diving Museum, the history of the Divinhood helmet is paramount to the story we tell here. It encompasses a large segment of the museum, a segment in history that exhibits six displays in the museum. Furthermore, the Divinhood Style 2 is the logo for the History of Diving Museum because of its significance to South Florida, the Florida Keys legend Art McKee, and its groundbreaking design making it the logical identity of the museum.
Posted by Christopher S. Dutton, Diving History at 1:16 PM 6 comments: