Getting A Handle on Things 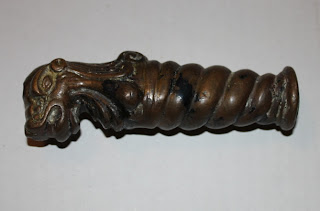 Well, it's my second week here at the History of Diving Museum and I feel like I'm finally starting to get the hang of things. Erin and I have been photographing, cataloging and labeling objects in the museum's collections and I've learned more about diving in the last week than I had in the previous 26 years! One particularly interesting object that needed "collections attention" was a dagger handle salvaged from a Spanish shipwreck by Arthur McKee, known to many as the "father of modern treasure hunting." 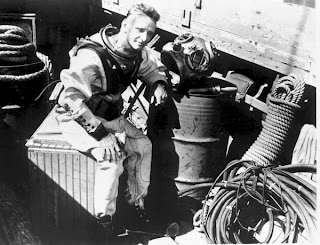 Art "Silver Bar" McKee (1910-1979) made a name for himself in the Florida Keys before scuba diving became a popular recreational activity. One of the few "celebrity divers," Art appeared both in LIFE Magazine and on the Dave Garroway Show in the 1950's. He is credited, along with Ed Link and Mendel Peterson, for the invention of the underwater metal detector, jet propulsion vehicle and sift cage. Art was also no stranger to museum collections, starting the world's first "Museum of Sunken Treasure" in 1949, just north of here on Plantation Key (now the Montessori School). In its time, Art's Museum of Sunken Treasure was the premier tourist attraction in the Upper Keys, composed of many local artifacts. 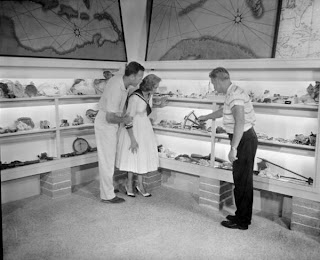 Treasures from the shipwrecks of the 1733 Spanish Plate Fleet really built up Art's collection in the early days, as he salvaged them for years after receiving information regarding their fate from the Archive of the Indies in Spain in the late 1930's.
The ill-fated Spanish Fleet left port from Havana, Cuba on July 13, 1733 (Friday the 13th), bound for Spain and loaded with precious cargo. Little did they know of the approaching hurricane that two days later would ground most of the twenty-two ships in the shallow waters of the Keys. 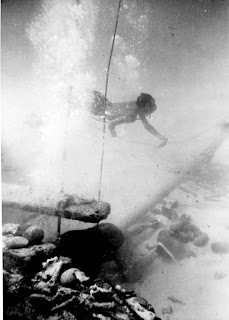 Luckily for the Spanish, the hurricane was not a severe one, resulting in many survivors and the opportunity to recover many of the treasures themselves. Still, they couldn't salvage everything, leaving plenty behind for Art McKee to uncover more than 200 years later.

The dagger handle, now on display at the History of Diving Museum, was one of the objects left behind by the Spanish and recovered by Art McKee. It is a wonderful piece of craftmanship, with a design resembling the head of a lion. When I first handled it in my cotton gloves, I couldn't help but imagine whose hands had gripped it in the past, and for what purpose? Art McKee liked it so much that he posed for a portrait with it (also seen in the exhibit)! Perhaps its original owner thought it so commonplace that they discarded it on purpose. 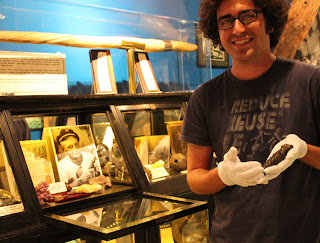 Or perhaps it was lost in the mad scramble to shore after the ships ran aground! No one will ever know its exact history for sure, but it will fuel imaginations for years to come. That's part of what's so great about museums! Art certainly recognized that and his imaginative and adventuresome spirit lives on in the "Art McKee and the Treasure Hunters" gallery at the History of Diving Museum. If you are interested in seeing the dagger handle, be sure to visit the museum soon, as it is currently on loan from the collection of Carl Fismer! 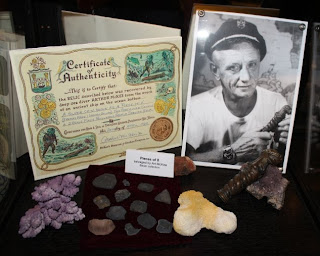 Black and white photos of Art McKee courtesy of the State Archives of Florida.