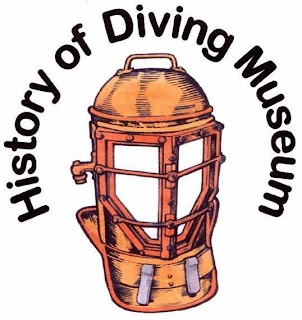 Welcome back to the History of Diving Museum Collections Blog! You may have noticed we have taken a month long hiatus from online diving history. We are pleased to be sharing all new topics on items within the museum's collection. In our second series, we will cover part II of the U.S. Navy Mark V, rebreathers, and much more, with pictures and information that won't be found anywhere else!

This blog takes us back to the earliest of diving techniques...

The first exhibits at the History of Diving Museum illustrate a historical timeline, which reinforces the idea that there has always been a natural fascination for 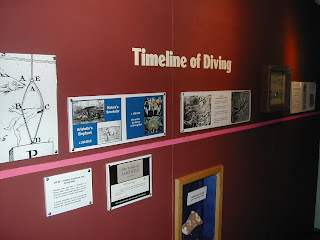 man to explore the deep sea, and before submarines, diving helmets and SCUBA, man employed a wide array of techniques to get there. As early as the first traces of mankind in ancient Mesopotamia, evidence confirms that diving techniques were used for a variety of applications.

As with any history, we tend to interpret it linearly, meaning we look directly at what led to our successful technologies. This approach to history, however, neglects key developments that can prove very significant to its interpretation. In the historical timeline, improbable diving machines present that segment in history almost lost because of an indirect link to the diving techniques of today. 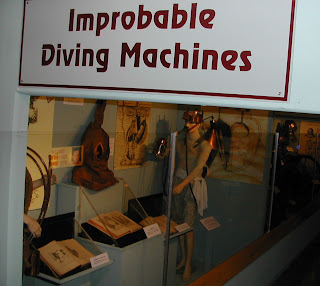 complicated, involved, and often times, functionally unsound. Many are oddly shaped with unusual designs, but however strange they appear, they are significant to the history of diving; they stand as proof that man did whatever was necessary to venture beneath the sea, regardless of the risks involved. For this reason, improbable diving machines belong in the timeline of diving.

Many of the improbable machines displayed in the exhibit have an easily identifiable design flaw. For instance 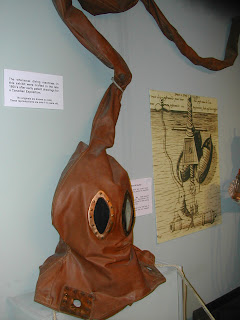 , most visitors to the museum can point out the flaw in the the leather hood and snorkel concept (pictured on the right). This whimsical machine was limited by the pressure on the diver's chest, which would have prevented him from inhaling air more than one or two feet deep (hence the length of the average snorkel). Another limitation is that the snorkel is made of leather, a collapsible material, which also would have failed because of the effects of the hydrostatic pressure. This apparatus has a unique design, and with certain tweaks (shortened length of the snorkel and constructed with a solid composite) it might have worked.

Although this exhibit is named for the improbability of the successful application of these machines, not all would have failed... 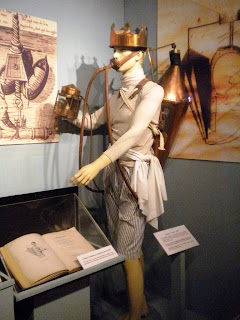 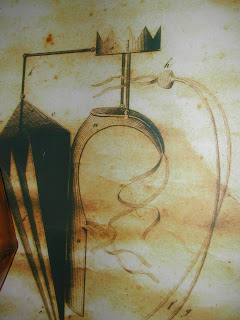 backpack contained two bellows activated by the diver moving his head back and forth. The bellows received air supply from the surface that supply air to the diver and also to his lamp. This early attempt at underwater lighting recognized that candle flame needs fresh air just as the diver would. The design, although highly unlikely to be of any purposeful application, could have worked in shallow-water. Along with this diving apparatus, the History of Diving Museum also displays Drieberg's original book "The Memoir of a New Diving Machine called Triton" illustrating this spectacular apparatus (written in 1811).

Another improbable diving machine on display at the museum is the"copper kettle," designed by Karl Heinrich Klingert, a German-born mechanical engineer. Credite 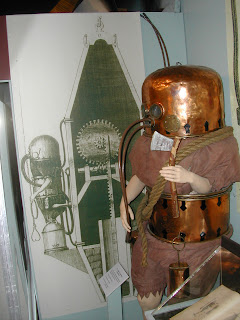 d as an innovator in diving, his 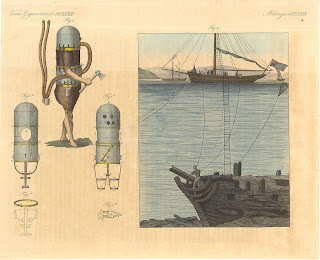 copper kettle shares many similiarities to the diving helmet, which wouldn't be developed commercially for nearly a century. One of the first examples of self-contained diving, Klingert's design used a large reservoir piston or could be supplied from the surface. The copper kettle was used successfully in 1797, when a diver wearing Klingert's outfit removed a submerged tree limb from the River Oder in Germany.

Although Drieberg's "Le Triton" and Klingert's "copper kettle" never became the standard diving equipmet, they are significant from the standpoint that there was great risk involved. They provide a broader understanding of man as an explorer, a maverick, and a dare devil that put life in harm's way to explore the unknown. The "Improbable Diving Machines" exhibit is significant to explain a segment in history where many different machines were tried, not to become pioneers in diving, but to better access the world around us.
Posted by Christopher S. Dutton, Diving History at 1:53 PM