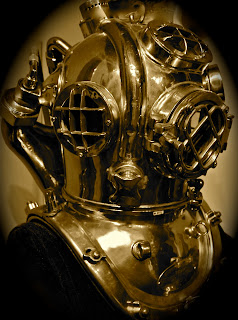 It's hard to believe, but the History of Diving Museum Collections Blog is entering into its third month of online diving history! The focus of this blog has been to inform readers on the history of artifacts within the collection. So far, I have chosen only those items with great significance to diving and Florida Keys history. Although diving bells, Art McKee, the first American diving helmet and the last petroleum lamp are very important, I have somehow neglected quite possibly the most important piece of diving history...

The U.S. Navy Mark V is the most coveted and recognized diving helmet in the world. It embodies helmeted diving with its bold look, functional design and long-standing history in American diving. Navy Dive Master Carl Brashear (his story was the inspiration for the movie Men of Honor) used a Mark V during his career. Today, it symbolizes not only an important segment in diving history, but also stands as one of the most important technologies in the history of the world.

On to the history... 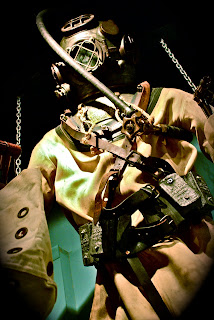 In 1912, Navy Gunner G.D. Stillson wrote a letter to the Bureau of Construction and Repair (Bureau of Ships as it is called today) concerning the current diving program or lack thereof! He assembled a team and began a critical analysis of existing diving procedures. In the following years, Stillson and his team were commissioned to evaluate, improve and redesign every part of the diving program.

This evaluation produced two major developments. By 1915 G. D. Stillson, through the intercession of the Bureau of Construction and Repair, completed the first U.S. Navy guideline for diving know 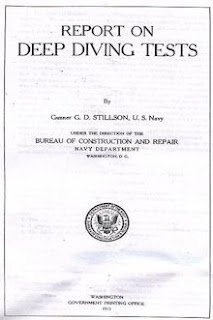 n as the Report on Deep Diving Tests. This report served as the framework for Navy diving in the years to come. In it, Stillson discussed the necessary decompression times for deep dives, principles of pressure and most importantly, the equipment fostered through the program.

In Stillson's evaluations, he tested a wide variety of diving equipment, mostly those from the Schrader and Morse Companies, but also equipment from Draeger and Siebe. In the two years leading up to the completion of the Report on Deep Diving Tests, a standardized equipment would be developed for the U.S. Navy, giving birth to the Mark I! 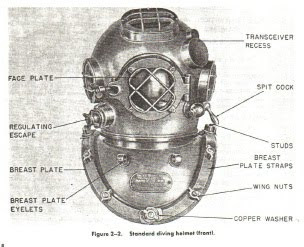 The Mark V helmet, the standardization of the diving program and the self evaluation of the program, symbolizes the future of the U.S. military as we know it. Mark, a work frequently associated with military hardware, simply means a 'standard' or 'variant.'

Stillson and the Navy experimented with four versions of the Mark helmets, the Mark I, II,III and IV. The Mark V combined the best aspects from the previous four helmets. The final version was completed in 1917 and remained largely unchanged until its decommission in 1984. It is believed that only a mere 7,000 to 10,000 were ever constructed.

Four companies were commissioned to build the Mark V. The first Mark V helmet was made by the Morse Company; it is also the most common. Schrader, Desco and Miller-Dunn were also commissioned to build the Mark V. The Miami based Miller-Dunn Company produced the fewest helmets making them the rarest by today's standard. Out of the hundred or so helmets manufactured by the Miller-Dunn Company, the History of Diving Museum has two on display. 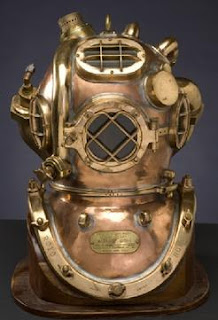 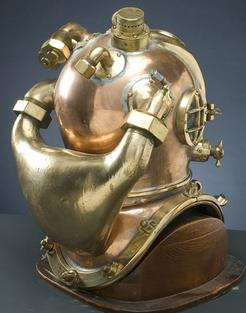 . To offset this affect, the helium Mark V needed increased weight to compensate for this added force. The boots are larger and lace just below the knee (a rather stunning look for those who have seen the design). The 'Banana Exhaust' was moved from the back of the helmet to the top where it was excluded from its original placement due to the scrubber. Lastly, the dumbbell lock was moved from the rear of the helmet to the front. 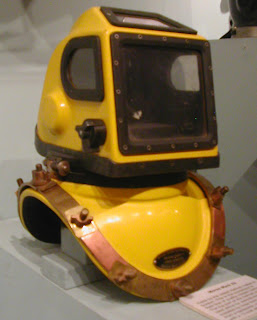 In the late 1970's, the Mark helmets changed completely. No longer a metallic base, the Marks are now fiber glass which changed the identity forever. HDM displays a newer version from the Mark line. The Morse Mark XII is the successor to their line of copper helmets. The top part of the helmet can be used alone for swim diving with air supplied by a hose from the surface, or a backpack or used with a 12-bolt attachment. It is much lighter than the original Mark V diving dress.

The Mark V is the icon of helmeted diving, thus this blog cannot be completed without a more in depth look at the helmet. This will be a two-part blog; the second part will provide an overview of the components on the Mark V. If you would like to learn more about what made this helmet one of the best manufactured technologies of the twentieth century, stay tuned for our next blog! The History of Diving Museum is the largest collection of historical diving apparatus in the world, we're proud to be your source for diving history!
Sources:
http://diveamarkv.com/4.html (accessed 08/28/2010)
http://www.divingheritage/markvkern.htm (accessed 08/28/2010)
http://www.pricesforantiques.com/ (accessed 08/28/2010)
Posted by Christopher S. Dutton, Diving History at 11:27 AM