The History of Diving Museum is home to thousands of artifacts that represent the rich and long history of the sport of diving. I am the new intern Jonathon and I will be at the museum through October. During my first week at the museum, the Commercial Diving exhibit caught my eye and I wanted to take a closer look into the field of commercial diving.
One of the most unique aspects of commercial diving is its long history. Beginning around the 16th century, people began diving not only to explore the ocean, but for commercial purposes like the salvage of wrecks, retrieving lost cargo, and to repair and maintain underwater structures. Through time, the commercial applications of diving have become known internationally and are currently practiced all over the world. The main “branches” of commercial diving are offshore, inland, scientific and nuclear diving. Offshore and inland diving being the most popular, focus on underwater welding and maintenance. This is why you see most commercial divers working on oil rigs in the Gulf of Mexico and at busy ports throughout the world.

Why are they needed?

If you think about it, who in their right mind would want to dive 700 feet underwater in areas not only unknown to humans but also pitch black? In my opinion, this is the most interesting part of commercial diving: trusting your equipment and yourself hundreds of feet underwater while performing tasks that require extreme skill and concentration. With that in mind, commercial divers are also trained as welders and mechanics. In the field of commercial diving, welding is very broad and important. It can consist of welding ships, repairing pipes, welding bridges and many other challenging tasks. To put the importance of commercial divers into perspective, the Golden gate bridge is one of the most beautifully built and well constructed bridges in the world. Many people do not know that it was constructed and is still maintained by commercial divers. Bridges, pipelines, and oil rigs need to be closely watched and maintained and without commercial divers this would be an almost impossible task. The maintenance of bridges, dams and oil rigs requires certain skills that are demanding and difficult – requiring the commercial diver to be a very skilled and knowledgeable individual. As a result, divers in this field are highly sought, extremely valued, and well-paid. Universities all over the world provide programs that give students the skills to become commercial divers. These programs are challenging, difficult and in the end provide sustainable jobs for people around the globe. 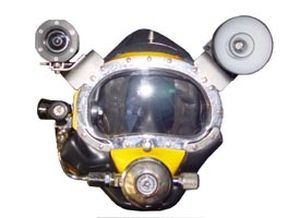 At the center of HDM’s Commercial Diving exhibit is a Kirby-Morgan SuperLite. The SuperLite is currently one of the most widely used helmets in commercial diving and has become the industry standard. Considered the most advanced helmet today, it combines many different elements that create comfort and durability for divers.  The SuperLite is equipped with a communication system, a helmet shell and ring which prevent exposure to water, and a SuperFlow regulator which provides controlled an easy breathing for the diver. The Superlight is also unique due to its ability to hold specialty items. In this picture, the superlight is equipped with a camera and light. The light is useful for providing illumination in dark depths while the camera is used for research and documentation. These are just a few of the tools used by commercial divers – many of which are on display in the exhibit.

Sadly, the helmet in the exhibit once belonged to aquanaut Dewey Smith – a research diver at the nearby Aquarius Reef Base. Dewey lost his life in May of 2009 due to a re-breather malfunction. His helmet was donated to the museum by his parents in his memory, and serves as a poignant reminder of the ever-present dangers involved in the field of commercial diving.


Also located in the exhibit is the Commercial Diving Hall of Fame Monument. The CDHoF was established in 2003, nominating and inducting divers that have made a substantial contribution to the field of Commercial Diving. The monument can be seen in the History of Diving Museum year round with the exception of the annual induction ceremony in New Orleans when it is crated up and shipped to Louisiana.

You’ll see all this and more when you visit the History of Diving Museum, explore the Commercial Diving exhibit and immerse yourself in hundreds of years of diving history! -Jon